Back from the wilderness

Hi everyone,
Well here I am, posting for the first time in almost three months. Life really has got in the way of crafting over the latter half of the year ... first my mum passed away in July, and then my dad was taken ill in October and I had to have a bit off  time of work to be with him as he doesn't live near me.
Things have hopefully settled down now, but my mojo had completely disappeared so I decided not to put any pressure on myself with making Christmas cards etc. ... I just wrote off this year for that, sent the few I'd already made and bought the rest!! Meanwhile I have been gradually getting into a new hobby - after many years of never cooking, indeed never entering the kitchen unless under duress, I have rather belatedly discovered the joy of baking! I'm still at an early stage with it, but I'm also starting a baking blog for 2014 both to chart my baking adventures and to raise a bit of money for charity - so I hope you'll have a peek!!
Anyhow, I decided with the New Year approaching I would try to kick start a resurgence of my creativity; so today I sat down and made a DT card for later this week ... my first card since the start of October!! Having made that one I thought I may as well make another card to post while I'm still on my Christmas hols, so I pulled out some of the stash I  bought for Christmas cardmaking this year and never got to use! Here's the result ... 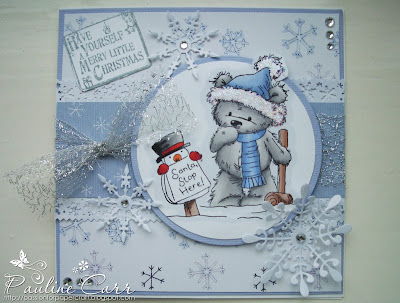 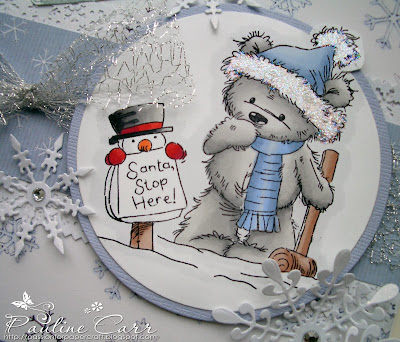 
Well that's all from me for today, and probably for this year. I'll be back soon though, and hope to be fully back into the swing of crafting for 2014!
Happy New Year!
hugs,

Pauline C
I love stamping and colouring, started cardmaking back in 2005 and this blog in 2008. I mostly took a break from 2013 for personal and work reasons, and returned to crafting in summer 2021 - so I'm now on an ongoing mission to resurrect my “passion for papercraft”!

All content including text, photographs and design work are © Pauline Carr. Feel free to share my creative ideas, but please do not copy them for commercial use or competition entries. Thank you for your support.